In two previous posts, I explained Augustine’s argument against literature. This argument comes from Augustine’s Confessions, which is probably his most widely read book.

In this post—my third (and final) post on Augustine—we will look at Augustine’s small book Teaching Christianity (or De Doctrina Christiana). In this tiny volume Augustine explains how Christians could—and should—study all profitable areas of pagan learning.

As he develops this theology of Christian learning, Augustine also finds a place for literature in the service of the Church. It is a small place, though, and it fails to realize literature’s full power to do good in the hearts of its readers. 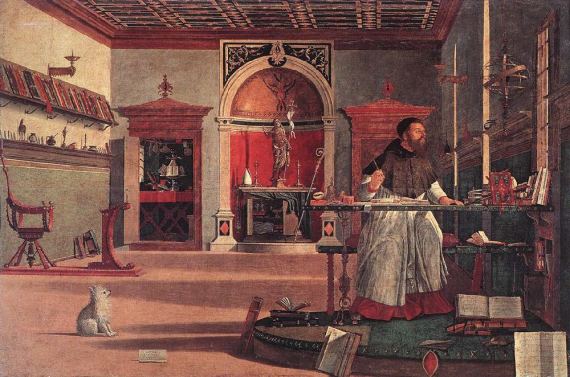 My Debt to Augustine

Before I begin, I first need to say that I owe an incredible debt of gratitude to this fourth century African bishop.

I first read Confessions in college and drank deeply from its wisdom. I have read it continually since. The same is true for Augustine’s Teaching Christianity and The City of God. Augustine has taught me more about theology, the life of the mind, love, faith, and my vocation than any other author I’ve read.

So in these articles on Augustine I haven’t been trying to correct an error of one of my favorite teachers. I’ve been trying to understand the different attitudes Christians have had toward literature. Augustine’s warnings about the dangers of literature in Book 1 of Confessions is a very famous passage. It is also completely true—when read in its right context.

But though I have great respect and gratitude for Augustine, he doesn’t ever discuss the power for good that a well-crafted story can have on its audience. And so, his discussion of literature in Confessions is one-sided—it focuses on how literature can warp the soul, but doesn’t discuss how it can awaken love and build virtue.

Were Augustine alive today, I have no doubt he would marvel at the glories and graces contained in Dante and Shakespeare. And as C.S. Lewis once expressed his eagerness to read the rest of Spenser’s Faerie Queene in the New Jerusalem, so I look forward to hearing Augustine’s lectures on Purgatorio and Paradise Lost.

But on to Teaching Christianity…

In Book II of Teaching Christianity Augustine argues that Christians should study any area of pagan knowledge that might be useful to the mission of the Church. Using a now-famous analogy to the Israelites plundering the Egyptian gold, silver, and linen in the Exodus, Augustine says that pagan knowledge contains numerous errors but also a lot of gold and silver:

[A]ll branches of heathen learning have not only false and superstitious fancies and heavy burdens of unnecessary toil, which every one of us…ought to abhor and avoid; but they contain also liberal instruction which is better adapted to the use of the truth, and some most excellent precepts of morality” (II.40).

Now these are, so to speak, their gold and silver, which they did not create themselves, but dug out of the mines of God’s providence which are everywhere scattered abroad, and are perversely and unlawfully prostituting to the worship of devils” (II.40).

Since the gold and silver of pagan knowledge rightly belongs to God, Christians should study all useful areas of knowledge “soberly and carefully to discriminate among them” (II.39). Through prayerful study and discernment, Christians can extract the precious metals from the dross of pagan error. The gold and silver can then be put to its proper use in the service of God.

Moreover, if those who are called philosophers, and especially the Platonists, have said aught that is true and in harmony with our faith, we are not only not to shrink from it, but to claim it from those who have unlawful possession of it” (II.40).

A Use for Literature

One of the areas of pagan learning that Christians should plunder is literature (in the form of poetry, a species of rhetoric). And the proper use of literature, according to Augustine, is to make the Christian preacher eloquent enough to persuasively proclaim the truth and decisively declaim against error:

Since, then, the faculty of eloquence is available for both sides, and is of very great service in the enforcing either of wrong or right, why do not good men study to engage it on the side of truth, when bad men use it to obtain the triumph of wicked and worthless causes, and to further injustice and error?” (IV.2.3).

While defending the gospel of Christ certainly is a high and noble use of literature, it is a very narrow application. Augustine argues that Christians should read literature to learn how to turn a phrase, how to package truth in eloquence.

Augustine values literature for its ability to effectively communicate propositional truth and for how it helps us understand Scripture (Books II-III). The place that Augustine finds for literature in the Church, then, is a very pragmatic place—literature is a mere tutor in the Church’s fight for human souls.

But near the end of Teaching Christianity Augustine explains how a speaker whose eloquence has been trained by the study of literature can “bring [the audience’s] feelings into harmony with the truths they admit” (IV.4.6). The speaker can not only convince his audience of the truth but also call forth in the audience the proper emotions to correspond to the truth.

In other words, literature can teach the orator how to positively shape the hearts, minds, and souls of others. Though Augustine never develops this aspect of literature further (that I’m aware of), it is a glimpse of the true power of literature, an embryonic idea that wouldn’t be developed fully for several centuries.

Augustine’s withering argument against literature in Confessions condemned literature as distracting and dangerous. And though he acknowledges the limited usefulness of literature in Teaching Christianity, Augustine’s greatest contribution regarding literature was his exhortation for Christians to glean from pagan learning everything of value and put it to the service of the Church.

In the centuries that followed, many Christian thinkers heed Augustine’s advice and plunder the treasuries of classical literature. And the beauty of the golden temples they build are far brighter than anything that came from Greek or Roman pens.

Share Tweet Buffer Print Email
Categories: Classical Education, Reading Life
Disclosure of Material Connection: Some of the links in the post above are “affiliate links.” This means if you click on the link and purchase the item, I will receive an affiliate commission. Regardless, I only recommend products or services I use personally and believe will add value to my readers. I am disclosing this in accordance with the Federal Trade Commission’s 16 CFR, Part 255: “Guides Concerning the Use of Endorsements and Testimonials in Advertising.”