Share Tweet Buffer Print Email
Editor’s Note:  I wrote this post two years ago, but what it talks about is worth repeating every year–until we get it right.)

Each year on February 2 my wife and I invite over a bunch of friends for a high feast of Philly cheese steaks, bottled lagers, and sweet potato fries.  As we eat we watch the underappreciated classic:  Bill Murray’s Groundhog Day. 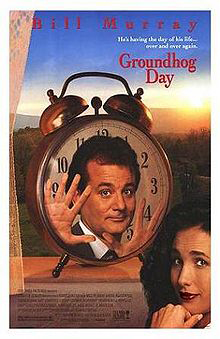 Bill Murray plays Phil Connors, a weatherman who finds himself stuck in an endless loop of the same day in the same place—February 2 in Punxsutawney, PA.  This is Phil’s private version of Hell: trapped in a small town with a bunch of “hicks,” no hot water, no phones, no luxuries.  What’s worse, everything is exactly the same each day.  Phil demonstrates absolutely no love for anything around him but himself.

At the beginning of the curious loop, Phil Connors is an egocentric jerk of a weatherman—arrogant, demeaning, crass, and selfish.  After realizing he can do nothing to escape from Feb. 2, Phil plunges into hedonism, indulging all his appetites in quick succession.  Ironically, being trapped in the same day actually gives Phil just what he always wanted—himself and nothing else. No messy relationships, no obligations, no strings to force his desires, dreams, plans.  But Phil rapidly grows disillusioned with self-serving pleasure and sets his sights on higher things—namely, Rita.

Rita is beautiful and virtuous, as her name implies—”Rita” means “pearl” (symbolized throughout the movie by Phil’s hoar-frosted window).  Phil uses his endless days to catalog Rita’s likes, dislikes, and history—all the knowledge necessary to seduce her.  Phil’s plans fail repeatedly; every Casanovic attempt ends with a hard slap on the face.  At one point Rita declares, “I could never love anyone like you, Phil, because you’ll never love anyone but yourself.”  Rita identifies Phil’s core problem—he loves himself and nothing else.  Like the groundhog, Phil’s shadow—his sinful self—dooms him to everlasting winter.

Rita’s spurning leads Phil to bitter cynicism.  He tells Rita, “You want a prediction about the weather, you’re asking the wrong Phil.  I’ll give you a winter prediction.  It’s going to be cold, it’s going to be gray, and it’s going to last you for the rest of your life.”  The endless cycle of Feb. 2 has become a metaphor for the futility of Phil’s narcissistic love.  Self-love can bear no fruit, and therefore has no future.

Phil finally convinces Rita that something odd is indeed happening to him, and so she agrees to spend the day with Phil.  This is the turning point for Phil, because he simply spends time with Rita for her own sake, not for some selfish end.  And through the course of this day, Phil sees the true depth of Rita’s virtue and beauty.  She becomes his Beatrice, his Lovely Lady who calls him to become a better man. After she falls asleep, Phil says to her, “I’ve never seen anyone who’s nicer to people.  The first time I saw you, something happened to me…I don’t deserve someone like you, but if I ever could, I swear I would love you for the rest of my life.”

When Phil wakes up the “next” morning, he makes strenuous efforts to change himself.  Rita’s virtue and beauty have so enraptured Phil that he willingly turns to the world with eager attention, caring for others, for music, literature, sculpture.  His love for Rita has caused him to begin loving the mundane things of Punxsutawney.  In theological terms, Phil dies to self and begins living for others.

Most significantly, Phil begins to do acts of mercy—giving money to the homeless, repairing flat tires, catching falling boys, saving choking men.  Love for Rita has transformed Phil from a scoundrel to a knight-errant, performing chivalric deeds that will make him worthy of his lady.  Though this is a delightful change, Phil still does good so that he can win Rita—he has yet another lesson to learn.

This lesson comes when Phil can do nothing to save an old beggar from dying.  No matter his efforts, no matter how devoted his love, he cannot keep the old man from dying.  Yet the very fact of Death has deepened Phil’s love; it has called him to attentive action for the old man for no other end than to serve. Phil has learned the true nature of sacrificial love, of selfless service to others.

With this final lesson, Phil has come to the end of his pilgrimage.  Far from seeing Punxsutawney as his own private Hell, Phil has learned to love the small town with all its quirky citizens.  Consequently, Punxsutawney has come to love Phil as well.  Surrounded by most of the town, Phil declares in his final coverage of the Groundhog Day festivities, “Winter is just another step in the cycle of life.  But standing here amongst the people of Punxsutawney and basking in the warmth of their hearths and hearts, I couldn’t imagine a better fate than a long and lustrous winter.”  The lesson Phil learns is clear:  the endless death of winter can only be broken by a love that kills the self.

Phil has learned that sameness is not a curse but a gift of grace.  Sameness teaches us how to love, how to sacrifice, how to devote ourselves to others. Seemingly endless days of poopy diapers, grumpy bosses, frustrated labors, difficult neighbors, and rebellious children are not a Hell that God has cursed us with but a gift that will teach us how to love properly.  Through the mundane and difficult our love grows strong and faithful.

And so, I celebrate Groundhog Day with friends and food to remind myself that Christ has called me to love the things of this world—starting with those around my table and simple things like bread and cheese and paper napkins.