The relationship between father and son is a difficult one, as the following poem reveals.  Sons look up to their fathers, despite their failures, and fathers shape their son’s understanding of what manhood is.  But sons are not their fathers.  As young men grow up they often feel anxiety both about not measuring up to their fathers and about moving in a different direction. 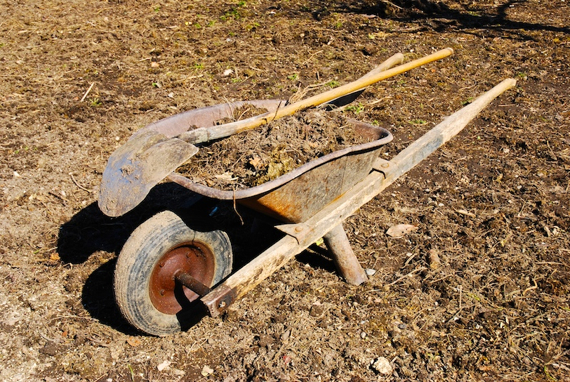 Seamus Heaney’s poem “Digging” expresses all of these anxieties beautifully.  And instead of bitterness and regret, the evocative sounds of Heaney’s poem sing with love, joy, and respect.  But read the poem for yourself (or click the title to hear me read it).

Between my finger and my thumb
The squat pen rests; snug as a gun.

Under my window, a clean rasping sound
When the spade sinks into gravelly ground:
My father, digging.  I look down

Till his straining rump among the flowerbeds
Bends low, comes up twenty years away
Stooping in rhythm through potato drills
Where he was digging.

The coarse boot nestled on the lug, the shaft
Against the inside knee was levered firmly.
He rooted out tall tops, buried the bright edge deep
To scatter new potatoes that we picked,
Loving their cool hardness in our hands.

By God, the old man could handle a spade.
Just like his old man.

My grandfather cut more turf in a day
Than any other man on Toner’s bog.
Once I carried him milk in a bottle
Corked sloppily with paper.  He straightened up
To drink it, then fell to right away
Nicking and slicing neatly, heaving sods
Over his shoulder, going down and down
For the good turf.  Digging.

The cold smell of potato mould, the squelch and slap
Of soggy peat, the curt cuts of an edge
Through living roots awaken in my head.
But I’ve no spade to follow men like them.

Between my finger and my thumb
The squat pen rests.
I’ll dig with it.

from Death of a Naturalist

The digging scenes after the poet has lifted his head from his writing and noticed his father working the potato beds.  This leads to a description of his father’s digging, which then leads to a memory of his grandfather digging.  Both descriptions give praise for the craft of the spade, the sheer good work of faithful men with sharp tools.

But the poet feels that he can’t measure up to his “old man.”  He can’t sling a spade the same way.  The next to last stanza reveals the poem’s undercurrent of anxiety:  the poet has no spade like his father and grandfather.  Can he be as good a man as they were?  This question is driven not by guilt or fear, but by love:  love for these men and their work.

The poet finds the answer to his question–and the resolution to his anxiety–when he realizes that he digs with his pen.  With the “squat pen” that rests in his hand he will go “down and down for the good turf.”  He will nick and slice through living roots of memory to harvest truth from the earth.  He will pile up sods made of words, and so show himself to be both his father’s son and his own man.  He will give himself to a craft as nuanced, difficult, and beautiful as theirs.

Another remarkable thing about this poem is its sound.  Heaney is a master of evocative sound. This poem is a perfect example of what Owen Barfield said about sound and meaning:  “The sound of language is crucially relevant to its poetic meaning” (Poetic Diction, 47).

Consider the sounds in these lines.  Say them aloud, tumble them off your teeth:

The sounds of this poem are a vital part of its meaning; they communicate the very sensations of digging.  One of the ways that Heaney accomplishes this is by using only Anglo-Saxon vocabulary.  Nearly every word in the poem is itself a short, squat, strong tool–just like the spades and the author’s pen.

Question:  What else should be said about this poem?