Today we come to our second reading in Beowulf, which tells of Beowulf’s fight with Grendel, the monster from the mere.  Here are my thoughts on this section’s ring-givers, peace-weavers, and night-fights with earth-walkers.

When you finish reading this post, be sure to share your perspectives and questions in the comments section. 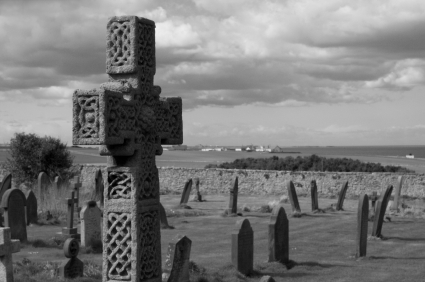 Before discussing the reading for this week, we should spend some time getting to know the Anglo-Saxons a bit better.  How they viewed community and king, exile and justice are particularly important concepts for understanding Beowulf.

For the Anglo-Saxon, Nature was a dangerous, unknown, unpredictable realm that constantly threatened the survival of the community.  Only in community could the Anglo-Saxons have any fighting chance to exist as a people:  community was a matter of life-and-death.  For this reason, Grendel’s attack on Heorot threatens the very existence of the Danes.

Because the community could be threatened at any time, particular social roles were essential to the health of the community:

The opening episode with Unferth (ll. 499-606) functions as character development for Beowulf.  Unferth accuses Beowulf of weakness because he once lost a swimming match to someone named Breca.  Beowulf confesses that he did lose the swimming match, but only because he was fully armored, swimming through a storm, and fighting numerous sea monsters–one of whom dragged him to the ocean floor before he finished it off.  So, yes, Beowulf lost to Breca, and the ocean is a bit safer (and the tides lower) because of it (ll. 567-79).

This episode is Beowulf’s “resume.”  It shows that he is a proven monster-killer and ready to face Grendel.  Beowulf’s speech gladdens Hrothgar’s heart and the Danes sit down to feast.  When Wealhtheow greets Beowulf, he repeats his boast to kill Grendel.

After Hrothgar departs Heorot with promises of great reward (like a good ring-giver), the Geats settle down for the night.  None of them expect to live through the night (ll. 691-93), but they will be loyal to their captain.  Despite their impending doom, when Grendel finally comes, everyone but Beowulf is asleep (ll. 704-05).  Is there a subtle allusion to the sleeping disciples in Gethsemene:  “Could you not watch with me one hour?” (Matt. 26:40)?

When Grendel arrives and finds the hall full of foolish men, “his glee was demonic,/picturing the mayhem: before morning/he would rip life from limb and devour them,/feed on their flesh” (ll. 730-33).  He grabs the closest Geat and bolts him down, bones and all.  Then he reaches for Beowulf…

The struggle is epic, shaking steel-banded Heorot to its foundation.  Its timbers tremble and its benches break.  Notice the numerous references to “hand…claw…talon…handgrip…hold…fingers”?  This repetition amplifies the intensity of the struggle between monster and man, lifting a single wrestling match to the level of cosmological significance.  This battle of brawn points to mankind’s ongoing struggle with evil in the world and in his own heart–a struggle that never seems to end.

Grendel’s heart fills with terror as soon as he feels Beowulf’s iron grip.  His courage depends on certain victory.  The first hint of defeat dissolves his ferocity:  “He was desperate to flee to his den and hide/with the devil’s litter” (ll. 754-75).  But the end has come for Grendel:  “Sinews split/and the bone-lappings burst” (ll. 816-17).

Grendel’s wound symbolizes his complete defeat:  the loss of an arm means the loss of power.  It also symbolizes Beowulf’s superior strength, especially when he nails Grendel’s arm to the wall as a trophy.  The Danes and Geats track Grendel’s “wound-slurry” to the edge of the marsh, knowing that “hell claimed him there” (l. 851).

The celebration begins immediately:  the Danes race their horses with boyish exuberance, and the scop begins singing a new song to tell of Beowulf’s deeds.  This song weaves together Beowulf’s story with two other stories from the bard’s tale-hoard.

The first story sings of Sigemund, a good king who killed a dragon and brought its treasure home to his people.  The bard uses this tale to amplify the glory of Beowulf’s fight with Grendel by equating Beowulf with Sigemund.

The second story is of Heremod, a selfish, vicious king who came to an inglorious end (as we’ll see later).  The well-known story of Heremod demonstrates that there are monsters within the community as well as outside.  The scop contrasts Heremod’s selfishness with Beowulf’s generous and courageous victory–risking life and limb for a people not his own.

Hrothgar congratulates Beowulf and adopts him as a foster son (l. 946).  Drunk with success and praise, Beowulf responds with an “Ah, you should have seen it!” speech (ll. 959ff.).

With Grendel dead, Heorot can be remade.  Hrothgar orders it refurbished and prepared for a celebration feast–the Winter of Grendel’s discontent is over.  Spring has come at last!

Hrothgar opens his treasure-hoard and lavishes great gifts on Beowulf and his men.  Then the bard sings again, this time of Finn and his sons–a story of treachery, vengeance, and brutal war.  Once again, this story amplifies Beowulf by contrast–he is a foreigner who delivers another people.  The Finnsburgh episode also contrasts with the opulence of Hrothgar’s gifts to his foreign guest.

After the song, Wealhtheow enters and praises Hrothgar for adopting Beowulf as his guest-son.  But then she does something rather odd:  she talks about how Hrothgar’s nephew Hrothulf will treat her sons after Hrothgar’s death.  She declares before Beowulf and all the listening Danes that she expects Hrothulf will repay the kindness his uncle has shown him (ll. 1180-87).

After this off-topic speech, Wealhtheow lavishes Beowulf with more opulent gifts, and petitions him to be a good counselor and protector of her sons (ll. 1226-27).  She concludes by declaring that all the Danish nobles are true to their king.  What’s going on here?  What’s Wealhtheow doing?

There have been several hints that Heorot will burn down as a result of civil war (ll. 81-84, 1014-18).  Apparently, Wealhtheow has already seen signs of ambition in her nephew, and so she uses the only power she has as a woman–epic speeches in front of the entire community–to secure protection for her sons.  By speaking publicly of Hrothulf’s obligation to show gratitude, she creates a public check on his ambition.  What’s more, she enlists Beowulf’s protection for her sons, who are sitting on either side of the monster-killer (l. 1190).

A very cunning woman, Wealhtheow binds Hrothulf’s ambitions with the dual cords of shame and fear.  Jael used a tentpeg to deliver Israel, Mary had a child and remade the world.  Wealhtheow uses nothing but words to protect the Danish people from the serpent that creeps among them.

But Wealhtheow isn’t the only mother in this story…

For next week, please read lines 1232-2199, which describe another fight with another monster and Beowulf’s return to Geatland. Then come back next Wednesday so we can talk about it.

Since we’re reading this book together, take some time to share your responses and insights to this reading in the comments section below.

Share Tweet Buffer Print Email
Categories: Bookclub, Reading Life
Disclosure of Material Connection: Some of the links in the post above are “affiliate links.” This means if you click on the link and purchase the item, I will receive an affiliate commission. Regardless, I only recommend products or services I use personally and believe will add value to my readers. I am disclosing this in accordance with the Federal Trade Commission’s 16 CFR, Part 255: “Guides Concerning the Use of Endorsements and Testimonials in Advertising.”