Some time ago I read an article on an ordinance passed by a Californian town that outlawed the public ringing of church bells. Curiously, there was no mention of any suit filed by the local members of the hunchbacks’ union, and it is anyone’s guess that Quasimodo will now have to crouch for new employment. But let us not miss the forest for the trees. 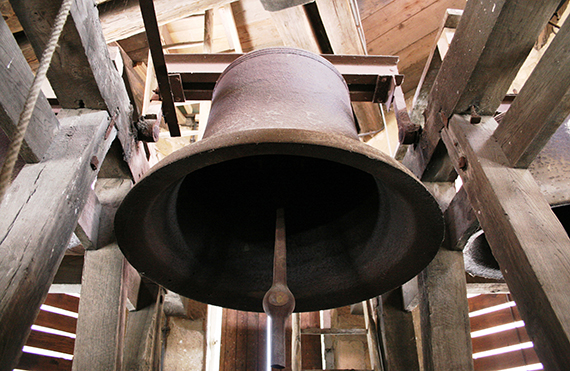 We must not commit the mistake of presuming that any primary doctrine of the Church Universal is the object of a direct assault. That we affirm the Trinity offends none. That we confess the Virgin Birth, the crucifixion and the life to come may elicit now and again one of those village atheist’s jokes which are as old as that time-honored office itself. This side of Mecca, the confession itself casts no seed for scandal.

The good city council of this municipality (whose name I forget–it was picturesque and smacked of terra cotta and expensive curio shops) was unquestionably innocent of any design against Christianity as a set of opinions. Consider also that an historical creed and a subjective opinion are to the run of educated people at present articles of indistinguishable weight.  This collection of creeds or accumulation of opinion (what you will) several members of the council may well hold themselves, and may even act on it so far as to take in an Easter mass every other year, or to have their foreheads marked on Ash Wednesday.

Yet where the opinions and conscience of a civil servant cannot make terms, it is only too clear which must give place. Common sense and mere compassion (those most bureaucratic virtues) cannot but show that a private citizen must suffer unspeakable pains of heart and mind, when six blocks off

“The curfew tolls the knell of parting day”

and he finds himself still at the office with work unfinished and Dodgers’ game unwatched. The impudent bells mock his limitations and aggravate the prosaic purgatory of modern life. What is more, they may  represent a set of religious opinions that does not appeal to him and of which he has never made even an unsober confession, as though the plangent message of another hour lost to pointless labor were not insult enough. Torquemada could do no worse, and Laud would gasp at the effrontery.

Civil regulation, as all who have read Locke know, is the cure for ecclesiastical conceit, and the city council provided just such a remedy with all of the efficiency which in our own day and age characterizes the legislative class. Ring out the old, announce the new by any means under x decibels that does not emanate from a religion-based institution.

Reactionaries will call these officials legalists or Pharisees or names far worse. Obloquy of this kind is, of course, specious and worthy of no serious answer. It was the nature of Pharisees to build protective hedges around the law, whereas these conscientious citizens put the law to its essential, pluralistic purpose, which is to build a protective hedge around confused individual convictions, lest they infest the public thoroughfares and obstruct the vital stir of voluntary associations.

The issue rests, the common good remains upheld. Having ceased her disruptive tintinnabulations, the Church finds herself restored to fellowship with Her natural colleague and well-wisher the State, whose periodic duty it is to remind Her not to forget herself in public, and to retain that silent and demure composure which best becomes Her, and which so wonderfully serves the best interests and highest aspirations of all, no matter what their race, creed, or lifestyle.