My last post gave five reasons to read the classics.  In addition to making you smart, rich, and sexy, the classics also make you a better person.  But where to start? Which books count as classics?

Since ideas and stories build on each other, the best place to start reading the classics is with the Ancients.  And to start you on your way through the ancient classics, here is my list of the seven must-read classics from the Ancient period. 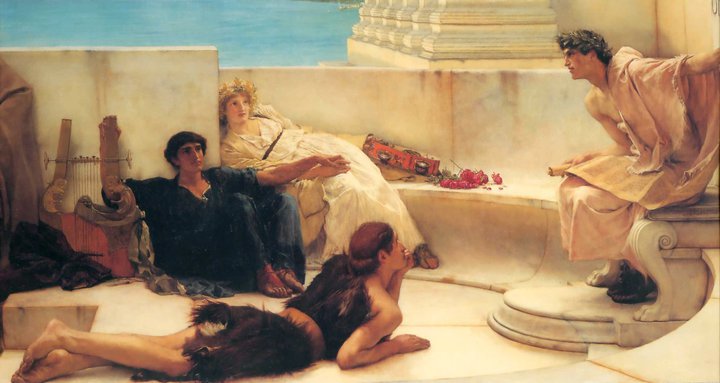 My first experience with the ancient classics was when I read Homer’s Odyssey one summer as required reading for my senior English class in high school. Despite my initial resistance, Homer’s poetry seized my imagination and refused to let go. I finished the entire epic in a matter of days.

Though the Odyssey is a rousing good story, what attracted me to the epic wasn’t its entertainment value, but what it was saying about my own life–about my own wanderings as a teenager casting about for the solid ground of identity, meaning, and purpose. Odysseus’ struggles to reach his wife and homeland became a metaphor for my own storm-tossed desires and anxieties.

Remarkably for me at the time, an ancient poem had deeply affected my vision of the world. It taught me that my struggles and angst could actually lead somewhere, to some solid ground beyond the horizon. My wanderings were meaningless without a destination.

And so, Homer’s Odyssey awakened me to the power and wonders of literature, which is why the Odyssey is always the first classic I recommend from the Ancient period.

The recommendations below are all Greek or Roman, since these cultures have profoundly shaped our own. Though some may object that I’ve ignored important Asian texts, I’m firmly convinced that before you study someone else’s culture, you had better know your own.

In addition to a summary, I’ve included a link to my recommended translation of each book.

So skip the theater this weekend and load your shelves with some great books instead.

Better yet, buy these books for your kids and read them together.

Share Tweet Buffer Print Email
Categories: Bookshelf, Reading Life
Disclosure of Material Connection: Some of the links in the post above are “affiliate links.” This means if you click on the link and purchase the item, I will receive an affiliate commission. Regardless, I only recommend products or services I use personally and believe will add value to my readers. I am disclosing this in accordance with the Federal Trade Commission’s 16 CFR, Part 255: “Guides Concerning the Use of Endorsements and Testimonials in Advertising.”